Types Of Roaches In New York 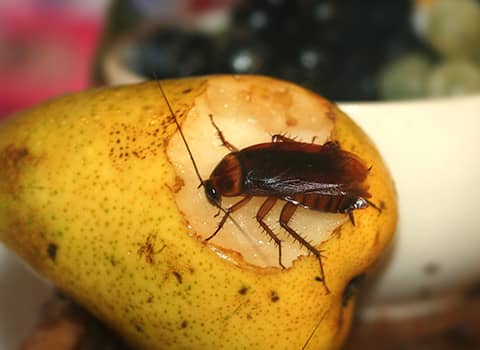 Have you ever heard it said that cockroaches will be the only survivors of a worldwide nuclear holocaust? There is good reason for this. While a cockroach isn't likely to survive a direct blast from a nuclear bomb, studies have shown that roaches can withstand exposure to over 10,000 rads of cobalt 60. For reference, it takes only ten minutes of exposure to 1,000 rads to kill a human. Why are we telling you this? Because this fact shows just how resilient these dirty bugs are. The only way to eradicate cockroaches, and keep them from getting into homes and businesses, is to understand their habits, habitats, and biology. In New York state, we have many cockroach species, but the two we see most are the American cockroach and the German cockroach. Here's what you need to know most about these two roach species.

The American cockroach should actually be called the African cockroach. This species of roach is not indigenous to the continent of America. It was brought here by ships from Africa as early as the 1600s. But, it hasn't wasted any time establishing itself in all 50 states.

Identification: This is a reddish brown, oval insect with two antennae, six legs, and two sets of wings that stack on its back and give a roundness to the tail end of this roach. Though it is mostly dark red in color, yellowish-tan coloring can be seen throughout, especially on the back of the head where this tan coloring combines with two dark brown spots to form a shape that can look like the number eight, under the right lighting conditions. The most notable characteristics of the American cockroach are the thorn-like tactile spines on its legs, which are used for touch. Though these tactile spines are not exclusive to this roach species, the size of the American cockroach makes them much more visible. Adults of this species are about 50 mm in length.

Accessibility: The American cockroach has many traits that allow it to get into man-made structures. While it is the largest roach species you'll find inside your home or business, it is able to compact its body to slide through thin gaps. Its large size also does not hinder it from climbing walls and walking across ceilings, like other cockroach species. The American cockroach has the ability to fly, but it isn't especially good at it, and is only going to fly when temperatures are warm enough. But, this ability allows this cockroach species to have more options for accessing structures.

This is another roach with an identity problem. While it has "German" in its name, the German cockroach does not originate from Germany. It is more likely that this roach species started in Asia. But, now it can be found in every nook and cranny of the world...even Germany.

Identification: The German cockroach is a flat, oval shaped insect with two antennae, six legs, and two sets of wings. Its wings stack on its back and are rounded at the tips. It is tan in color with two dark brown parallel stripes on the back of its head. There are tiny thorn-like tactile spines on its legs, but you'll have to look close, an adult cockroach of this species is typically only 13-16 mm in length.

If you have either of these two cockroach species in your New York home or business, it is vital that you seek the assistance of an educated professional. The ability cockroaches have to access your property is alarming. And their resilience makes them difficult to kill with over-the-counter pest products.

At Thomas Pest Services, we employ educated pest controllers who know the habits, habitats, and entomology of these insects. They are also kept current on the most advanced control methods and governmental regulations. When you need safe and complete management of cockroaches, Thomas Pest Services is the right choice.

" The squirrels are gone from my attic - great job. "