What Do Ticks And Mosquitoes Have In Common? 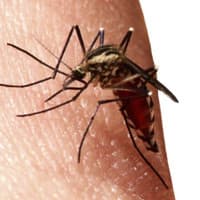 When looking at these two pests, it is easy to see all the ways they are different. One is an insect with six legs while the other is an arachnid with eight. One flies about collecting blood wherever it can find it, and the other is a parasite which hops from host to host. The list goes on and on. But instead of looking at all the ways these pests are different, let's explore the few things these bugs have in common.

"Blah, blah. I want to drink your blood!"

Yup. Both of these share a trait with Count Dracula. They both want to drink your blood. But they don't care if it is from your neck. They are happy to nibble on any spot they can get to. For ticks, it is the scalp. This pest waits patiently for a host to pass under a tree or bush and then falls on it. That is why most bites occur above the shoulders. Mosquitoes will happily stick their stinger into any area of flesh you leave exposed.

Ticks love the taste of humans, but they can also be found on birds, mice, rats, squirrels, rabbits, raccoons, possum, deer and cattle. They can even be found on lizards and snakes from time to time. That is a pretty wide selection of hosts.

The mosquito is an even less picky eater. They will bite anything with a pulse. But they prefer creatures that expel certain chemical scents from their skin--though scientists aren't quite sure exactly which chemicals, specifically.

"The doctor will see you now."

Both of these little biters have the ability to spread disease. If you don't like going to the doctor over and over again, you'll want to be sure to take precautions when traveling in woods that contain ticks. They are able to transmit many human-spread pathogens, but the worst of them is Lyme disease, which can cause medical complications years after infection.

Mosquitoes spread diseases that are so dangerous they have been called the deadliest "animal" in the world. This is mostly due to the transmission of malaria in Africa, which claims the lives of over a million people each year. In the United States, these pests can spread some human pathogens that will send you to the hospital.

The last thing these pests have in common is that they can be controlled. Granted, it requires more of a community effort to keep mosquitoes out, but it is still possible. Contact Thomas Pest Services and find out how you can protect your home from ticks, and work to reduce mosquito populations in your community. Together, we can protect ourselves from these dangerous predator insects.

" Thank you Bill for your work at our home. All is well. "