What Are Camel Crickets? 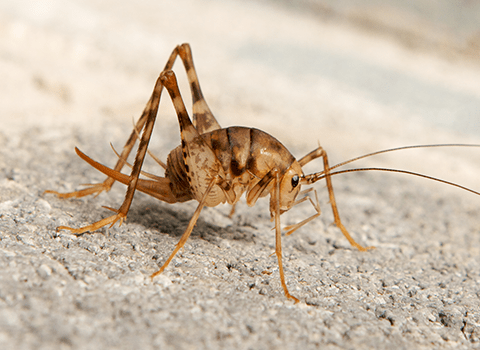 There is often little imagination when it comes to naming bugs. If a bug is found in a bed, it is called a bed bug. If a bug flies through the air, it is called a fly. If it is found living on Boxelder trees, it is called a Boxelder bug. A bug can also get its name because of its appearance. The Lone Star tick, for instance, has a single dot on its back and was probably given the name because it reminded someone of the single star of the Lone Star State. So, what are camel crickets, and why do they have this name? Are they crickets that live in the fur of camels? Are they a cricket species that can go a long time without drinking water? Actually, it is even more simple than this.

The name camel cricket is only one of several names given to insects in the family Rhaphidophoridae. These are nocturnal insects that are most often found in caves or areas of high moisture. They are called cave crickets because of their fondness of caves, sprickets because they look like a cross between a cricket and a spider, land shrimps because their body resembles a shrimp, and, of course, camel crickets because they have a humped back. This has led some to call them camelback crickets. Whew! Who knew crickets could be so complicated?

So, what is in a name? It is important to understand what creature you are referring to, especially when it comes to crickets. There are some crickets that get into homes and make noises that drive people crazy. Camel crickets don't do this. In fact, they are not capable of making the loud chirping sound that is often linked to crickets. This is good and bad. It is good because you won't find yourself awake at 2:00 in the morning with bloodshot eyes wondering where that infernal sound is coming from. On the bad side, you're not going to hear a peep out of this cricket until it leaps out at you from the darkness of your basement wall--which they are wired to do.

It isn't bad enough that camel crickets look like spiders. They have an instinct that causes them to leap at creatures they perceive as a threat. If you startle a camel cricket (spider cricket) in your basement, you can expect it to leap at you and give your heart a jump.

The biggest reason that most people don't want camel crickets in their home is actually not connected to any of the names given to this insect. If it were, they would also be called goat crickets. These insects have chewing mouthparts that allow them to eat pretty much anything they come across. They'll nibble on the food in your pet's dish, the plants in your garden, insects in your walls, and more. They'll also nibble on fabrics. This can make them a danger to curtains, clothing, bedspreads, upholstered furniture, and other important belongings. Usually, the fabrics they chew on are fabrics that are moist.

At Thomas Pest Services, we offer our Complete Care Plan to residential customers that want protection from spiders, roaches, ants, mice, yellow jackets, and a whole host of other invasive pests, including camel crickets. We serve the Capital District and the Adirondack region with industry-leading pest control that is overseen by a board-certified entomologist. Contact us to get your pest plan in place today. No matter what you call these creepy crickets, life is better when they're not inside your home.

" Thanks for coming over so quickly today. You guys were great and you put our concerns to rest. We look forward to working with you in the future! "